2003 – First Award by the Ministry of Agriculture

Katerina Sweets is given the A’ Prize from the Ministry of Agriculture, Natural Resources and Environment for the company’s innovations that utilize excess natural resources.

Katerina Sweets was given an award of honour from TuV CYPRUS (member of the TuV NORD Group) for being one of the first companies in Cyprus to successfully implement for six years the management system HACCP (now ISO22000).

The European Business Awards is an independent awards programme, sponsored by HSBC, dedicated to raising the visibility and progress of companies who excel in delivering innovation twinned with successful commercial results whilst acting responsibly and positively affecting the social environment they operate in.

In 2011 Katerina Cyprus Sweets was selected as the Country Representative of Cyprus. Katerina Sweets was the only company based in Cyprus to make it to the final stage of the awards process.

At the awards ceremony, the company was awarded the prestigious Ruban d’ Honneur, naming it one of the 110 best companies in Europe.

The awards ceremony was held in Barcelona, Spain with the attendance of key political and business figures of Europe.

Following this, a press conference was held at the factory’s premises with the Minister of Commerce, Mrs Praxoula Antoniadou and the First Lady Mrs. Andre Anastasiade (amongst others) congratulating Mrs Katerina for her award that promotes not only our traditional products but also the whole island of Cyprus in general. 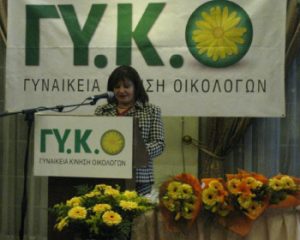 2012 – Cyprus Business Woman of the Year

The company is awarded by Euro-Toques, the official gastronomic organization of the European Union, for its efforts to maintain quality and preserve tradition while following the guidelines of HACCP.